Wow, and I've barely posted! Certainly not because I haven't been productive on the creative front, it's more of a procrastination thing. ;)

I finished Pumpkin's sweater, Le Classic by Espace Tricot. Although I like every aspect of quilting, from choosing the fabric to sewing on the binding, I can't say the same for knitting. I do not like blocking sweaters. It's so bulky and difficult to handle. 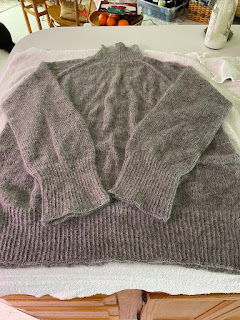 I've been thinking of getting a Wooly Board/Jumper board. Have you heard of them? 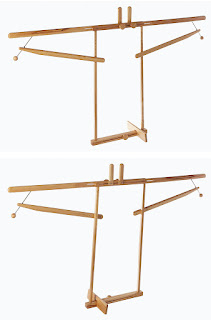 Hi! Nice to find you here this afternoon. I admire your ability to complete what I consider to be difficult knitting projects. That new sweater looks great and the cardigan will be amazing! Happy knitting, Carol.

The Fair isle stripe in that cardigan looks challenging.

Beautiful sweater and I am sure she will love it. I like oversized tops, having such wide shoulders I always have to go with a large. I havn't worn sweaters in years though, they make me itch too much. I did find one on Walmart, and I see Etsy is selling some, but made of pvc pipe, like the frames you get in the craft store. I wonder if you could fit them together yourself to make one. https://www.walmart.com/ip/Wooly-Board-Adjustable-Blocking-Frame/10660896

That looks pretty on the sideboard.....