After a summer break, our Sew we Gather group is meeting in mid September. I decided that I needed more fabric ... yea I know. Have you seem my closet? In my defense, I do not have a wide variety of Kim Diehl fabrics, especially backgrounds .... time for some shopping.

I stopped by the Fat Quarter shop and bought some backgrounds, Butter Churn Basics. Of course I couldn't resist and started to look around ... you know how that goes .... down a rabbit hole I go!

I ended up getting a fat quarter tower of Gratitude and Grace as well as some yardage of other lines. Look at that gorgeous package. 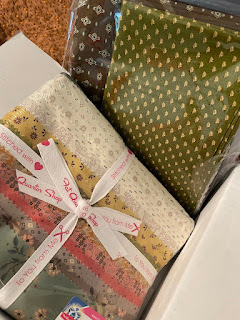 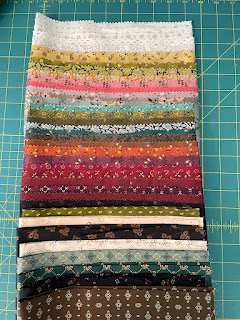 So delicious! I just love them. They certainly get the creative energy flowing.
Bought a new Kim Diehl book ... Simple Friendship II co-authored with Jo Morton 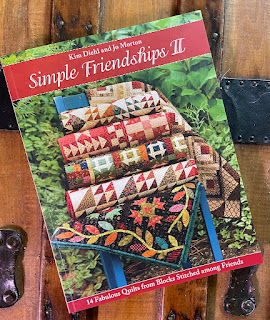 I feel inspired! I think it's time for me to start a new project!
Catch you all later! Cheers!
Posted by Carole at 10:59:00 AM 2 comments:

A piecing mood! A different kind of piecing but piecing nonetheless! ;)

As you all know by now, I love Lego! I've had a few kits that I hadn't built yet and today was the day I would tackle them.

It all started with the Bonsai tree. I had pieced it a while back. 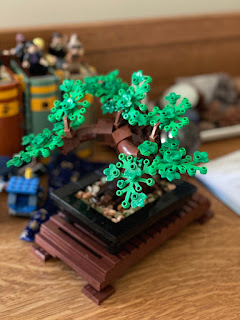 I decided it was time for the flowers to come out! 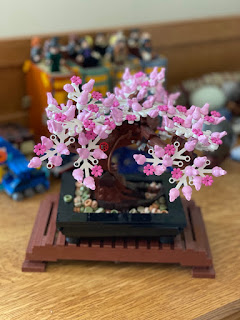 I've added my own personal touch .... a Lady bug, a chocolate frog and a bee!
After the Bonsai tree, came piecing Fawkes! 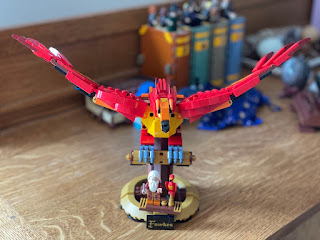 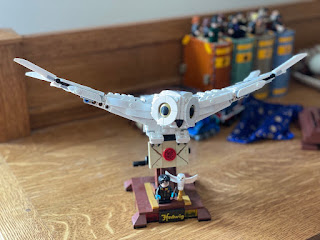 After piecing the flowers on the Bonsai tree and Fawkes, I thought it was time I continued building the Discovery Shuttle that Pumpkin and I started back in May. I brought it from: 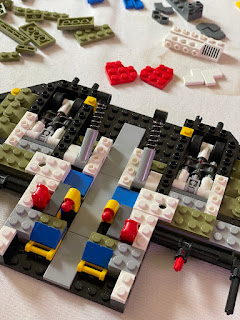 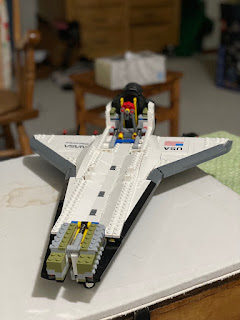 It's quite an intricate built! Loving every moment of it!
I'm a huge space buff ... Love reading about the space program .... mainly from Gemini onward. Here is my space collection .... so far! ;)

The ISS, Saturn V rocket and the Hubble Telescope, which will go into the Discovery Shuttle cargo bay. I haven't decided if I'll keep it out or in the cargo bay!
Thanks for stopping by and indulging me in one of my many passions! Catch you all Later!
Posted by Carole at 1:30:00 AM 1 comment:

Gosh, I'm really impressed with this new toy. Check it out! 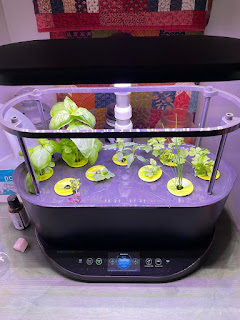 I can actually enjoy some fresh basil today with some tomatoes for lunch today.
I had mentioned how scrawny my neighbour's plants were looking. I think it was because he had never fertilized them. Well, check them out now! 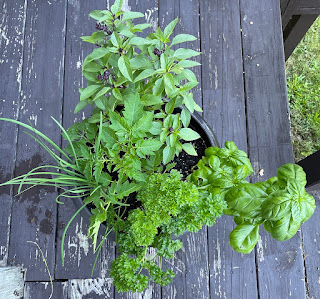 When I transplanted them, I seriously thought they were not going to make it. Hence why there are somewhat crowded. Heck, there's a tomato plant in the middle. That plant was barely 3 inches when I transplanted it back in mid July. The Thai basil (top) smells wonderful!

I'm loving my new aeroGarden toy! I can actually start seedlings for a future in-ground garden. How cool is that?!

Thanks for stopping by! Catch you all later!

Because I am such a home body (what can I say I'm comfortable in my home ... it's so peaceful and there's so much to do) I have to plan outings. So ... on Saturday, I went to the Farmer's Market. It was nice to get out ... it was such a gorgeous day.

Bought lots of locally grown organic vegetables and treated myself to a bouquet of flowers from Mossbrook Roots Flower Farm. Who knew we had a flower farm in our area. 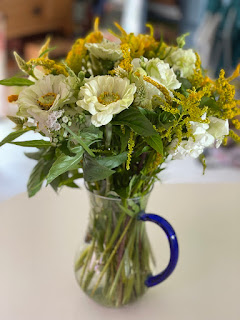 They included Thai Basil in the bouquet, it smells so lovely!

I do hope you are taking the time to enjoy the outdoors. We have had such a lovely summer here in way upstate NY.

Thanks for stopping by. Catch you all later.