After I finished the little Hexe quilt, I remembered another quilt that needed my attention. This English Paper Piecing quilt was started back in the Spring of 2013. The pattern is from the Primitive Quilt magazine, Spring 2013 issue. I did blogged about it here. I used 1/2 inch hexes and 1900 century reproduction fabrics. 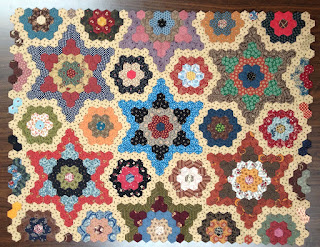 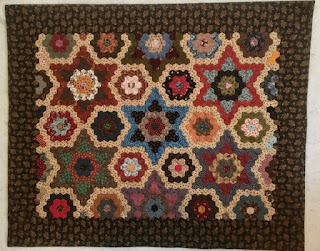 This project was actually a challenge with two other people. I actually completed the top in October 2013, and won the flimsy award. However Diane won the fully completed top and I think that was back in February 2014.
I do love how it turned out. It's such a great feeling to have completed a long over due project. 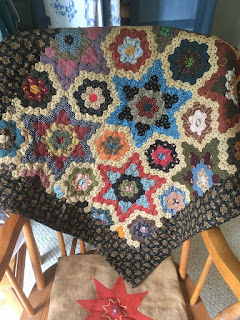 I'm not sure what I shall work on next .... so many UFO to choose from! lol
Thanks for stopping by my little corner in cyberspace! Cheers!~
Posted by Carole at 10:59:00 PM

Love your quilt! Have you had any more home improvement projects?

That is beautiful. I always love a good hexi quilt! Glad you did not trim it.

Wow! It turned out beautifully. And for what it's worth, I think you made the right choice in appliqueing the hexies to the boarder - truly, beautiful.

I like the solution you came up with for your hexi quilt. And it’s done now!

Beautiful quilt and I was thinking the same with my hexes, hate cutting them.

Oooh, this one is beautiful -- and what a great solution for the border -- I Love It!!!

so good to have the quilt finished and it looks great.......

I'm sure what ever you choose to work on next will be great.....