Still on the UFO trail!

Now that the holiday celebrations have come to an end, I'm back on the UFO completion project. I am pleased to report that I have completed another wool project.

The pattern is called Old St. Nick by Lisa Bongean of Primitive Gatherings.  I purchased this kit back in 2009 from the Quilted Crow. This was before Fibre Junction invested in wool.  I wanted to see if it would be a medium I'd  enjoyed working with. 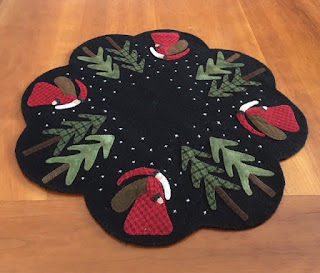 At the time, I was torn with the idea of using a fusible on wool.  I've never been a fusible kind of gal and wanted to stay away from the stuff.

In the UFO project bag was one Santa robe with glue on it. Probably an attempt to have the pieces stick to the wool. 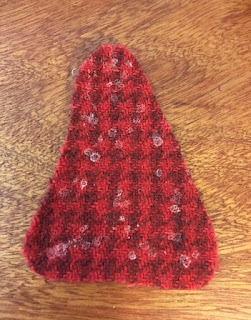 Obviously a failed attempt, as I broke down and used Steam-a-Seam 2 Lite on the other four Santa's robes and arms!

It is actually the first time I worked on a wool project that had so many small pieces. 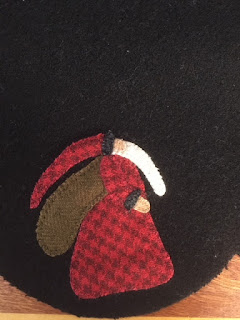 When I work with small pieces, I use one strand of DMC or Cosmo floss. I find that the size 12 Valdani pearl cotton is much to large and tends to rip up the pieces.

For the trees, I didn't like the wool the Quilted Crow had included, so I changed it to what you see.  Both green wools are from Primitive Gatherings! They do have gorgeous hand dyed wool!

Another photo with a decorations! 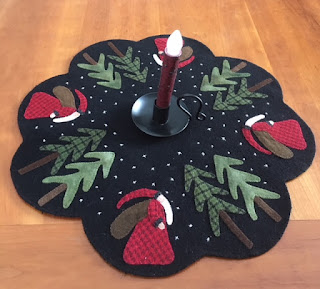 Thank you for stopping by my little corner in cyberspace! Catch you all later! Cheers!

I love this! The fabrics you chose for the tree goes perfectly with the Santas.

Wonderful piece, love doing wool toppers.
I have a lot of older wool and thrift, some washed up thick and dense, so I try to use that when doing small pieces.