Life has just been one big whirlwind as of late. I have had to make some decisions in my life, which is not always easy for me. I really have a hard time saying NO and find myself spread out thinly. I don't know what it is about my not prioritizing my sanity! lol

I don't have much to report on the quilting front. I did manage to practice some machine quilting. Remember that pantho back in March that gave so much trouble, well it dawned on me that it has some imperfections. In other words, the loops and curves were not just my lack of ability to follow the lines but the designer. Ya know, I can make my own mistakes, I don't need to follow some one else's. lol

Since I don't have any pictures to show that reflect where I'm at quilt wise, I thought I would shares one from my daughter. 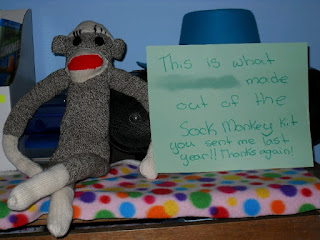 Isn't she just the cutest!

She received a Sock Monkey kit for her birthday last year and finally got around to completing it. I think she named her Socky! lol

My dd took the picture herself and sent it to her aunt and uncle.

I hope you are all enjoying Autumn. Thank you so much for dropping by!

Email ThisBlogThis!Share to TwitterShare to FacebookShare to Pinterest
Labels: Gratitude, Life the Universe and everything else

How cute! I hope your life calms down soon so you can quilt more!

Too cute!! And she has done such a great job. I bought a sock monkey kit last October and it is still unfinished - so she has done better than me -LOL

I made the Tomatoe and Basil Pie for dinner last night - very good!! Thanks for the link :)))

Cute monkey. Decisions, decisions, they are often hard to take.

The sock monkey is really cute! She did a great job on it :-) Hope things calm down for you soon, I know the feeling- I just keep telling myself things will eventually slow down. Have a great weekend!

I love sock monkeys. She did a great job on this little guy. Did she give him a cute name too?

You are right....who needs others to help you make mistakes. Glad that you figured it out.

Hope you get a chance to slow down a little and have fun with Penelope.

Hope it all settles out for you. Cute monkey....happy to hear that you are getting some time with Penelope.

I've not yet tried a panto - oh dear . . . I have enough troubles on my own *s* That's a cute sock monkey and a great way to send a thank you!

I love the sock monkey! My grandma used to make them for all the new grandchildren. Perhaps that's a tradition I should start with my grandchildren (in addition to quilts, that is)

That is an adorable sock monkey! Your darling daughter did a very nice job on it. Do we have another quilter in our future? I can't get my daughter interested in it yet. I am not going to give up though. :~) Maybe my granddaughter will follow in my footsteps. She sure likes to go shopping with me.

My DD has a collection of monkeys, I'll have to check with her to see if she made the sock monkey kit I gave her. I hope you get some organization back in your life soon. Be careful not to spread yourself too thin. Hugs, Wendy

My father had one when he was a child and remembers it fondly, I shoudl make one for him, just for fun! Yes! Autmn is here and I am so excited!

You and Penelope are making good progress. Love those swirling feathers in your last post. Your daughter's monkey is adorable, she did very well!

I thought you were describing me in your first paragraph there!
Take good care of yourself!