Believe it or not, I have never owned a TV. I'm not one to sit and watch programs on the television. I mainly stream and pay for what I watch and do so on my lap top computer.

My friend, Mary, decided that she wanted a bigger television screen and gave me her small TV. I thought about whether I wanted a TV or not ... I mean, it is fun to watch people's reactions to "you don't own a TV?" Even my neighbour's grandchild made mention when he walked into my home "where's your TV?" lol

I gave it some thought and decided that it would nice to watch my programming on a larger screen rather than on my small lap top. Actually, because I tend to view documentaries, I don't really watch the program, I mainly listen to it. So, I gladly accepted the free television. 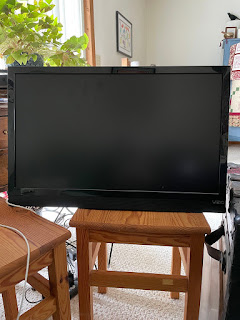 Of course I cannot own a television without a dvd/blue-ray player ... then came the Amazon Fire Stick to stream from the internet. So all in all this free television ended up costing me $150.00! LOL I just think that's funny.
I have been enjoying the free one year subscription to the Food Network Channel that came with the Amazon Fire stick. I guess you can say I now listen/watch cooking shows too! lol
That's pretty much it for me at the moment. Hope all is well in your world!

Thanks for stopping by. Cheers!

Email ThisBlogThis!Share to TwitterShare to FacebookShare to Pinterest
Labels: Covid-19 life, Life the Universe and everything else, Pitt Stop #14

lol. Bet you end up really enjoying it.

I do the same thing, listen more than watch, just background noise while I work on projects.
All our first ones were used black and whites, lol.