I've been re-watching some baking classes I purchased from Craftsy. I though it was high time I practice what I have been learning.

I used the pizza dough recipe from Richard Miscovich's book From the Wood-Fired Oven. 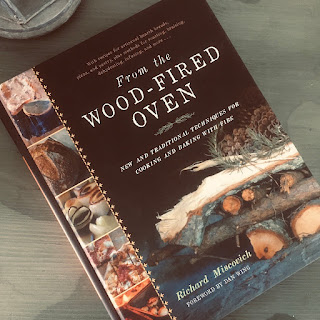 I love cookbooks ... more particularly, cookbooks that are personal ... that have a story to tell ... For me the recipes are somewhat secondary .... I just love to learn about other people's passion. I do not have a wood-fired oven but I do have an electrical oven that works amazingly.

The recipe I used had a five (5) hour bulk fermentation (yes I used my handy dandy proofer) and let me tell you it makes all the difference in taste. I also used an autolyse ... meaning I incorporated the yeast and salt at a later time.

The toppings .... whatever I had in my fridge ... so it became a vegetable pizza! 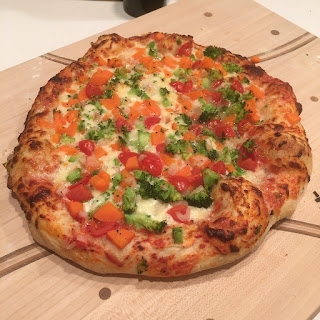 It looks a tad wonky on the right because .... let's just say I need to practice using a peel! No, it did not roll off the peel like in the movies! lol

Here is a side view ... check out that crust! 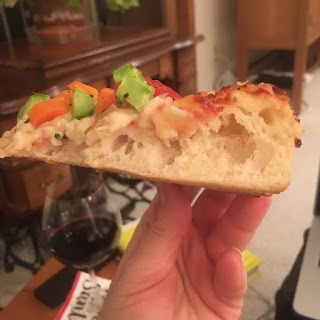 OMG, it was delicious .... whipped out the butter and ate the crust!

I have learned that the trick to a perfectly cooked pizza is a high oven temperature and a bread/pizza stone. I purchase my stone at King Arthur Flour (one of my favourite stores). It was a tad more expensive than other places but the stone is made in the USA and I didn't have to worry about any strange chemicals used to fabricate the stone.

Contrary from what most people think, bread/pizza or any other type of baking from scratch is really not that complicated .... and the results are out of this world.

Thanks for stopping by my little corner in cyberspace. Catch you all later! Cheers!
Posted by Carole at 11:07:00 AM

It looks amazing. A hint for easy roll off the peel is to sprinkle the peel with some semolina. The KA stone is incredible. Like you, I LOVE cookbooks. You can find recipes anywhere, but there is nothing like holding and reading a well done cookbook.

That looks delicious, I haven't made pizza since I went on my allergy diet, I do miss it.
I always liked pan pizza since it had thick crust and lots of topping and when you make your own, you can add what you want.