I've been decluttering, getting rid of stuff. It's amazing how much "stuff" we accumulate when we have a place to store it. Out of site ... out of mind!

I've been quilting for over 11 years (the number of years have been changed to protect the age of the blogger ;), and let me tell you ... you accumulate a lot of stuff ... projects you've started ... put aside ... that you may or may not want to finish. 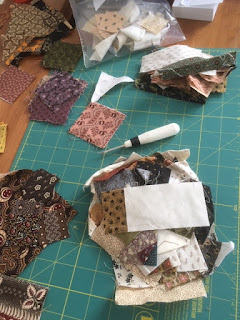 At what point/size is a fabric scrap considered a discard ... trash? Seriously, I have stuff that is less than an inch big!!!

In my defense, my plan was to create an English Paper Piecing quilt using 3/8" hexes .... CRAZY ... by the way the fabric saving has been going on for years, however I cannot say the same for the project ... it hasn't even been started!!!

Time to get rid of stuff!

I cleared out numerous UFO projects that I have no intentions of completing and gave them, along with the pattern, to a charitable organization. You know what they say ... One person's discard is another person's treasure!

As I was organizing stuff, I came across a box of various fabric scraps. 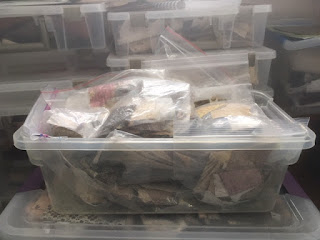 Some were sewn "left over" from various completed projects ... like the wings of a flying geese that you used as leaders and enders, hoping to include them in your next quilt. Not sure that's ever going to happen ....

Time to continue with the purge.

Good luck to you on your purge. I've been quilting over 11 years too, and have been meaning to tackling the sewing room, but so far have managed to do the living areas. The sewing room is next! Finally!