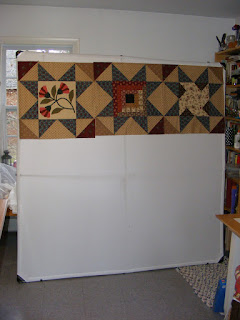 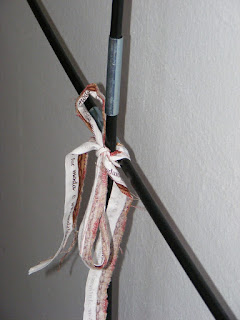 I found the exact same issues with mine. I think I could make a much more sturdy one using a snap together PVC pipes and end caps with some flannel. It is good for smaller designs, but then why do we need such a large one????

I like what I see on your new wall too!

At least the blocks look great...

I have been looking at these and thinking that it would be great to have at retreats. Your blocks look great.

I like the idea of having a wall too, would be nice for placement in piecing. I always do a square backwards;)

Now I was thinking, wouldn't it be nice to have one that rolled from the ceiling, then it would be out of the way and easy to pull down, lol.

Sounds like that wall was a bit more of a production than it should have been!!
I have a piece of pellon type fleece stapled to a wall in my basement just outside my sewing room, and it works really well. Nice and stable and if the pieces are not staying on I can pin them in place. It is nice to have a wall - I always have a little something on it - so it never looks like a plain white wall. Better than hanging pictures!!

I love my design wall! It helps so much in color placement. Nice to see it before I sew it together. Love the blocks! I have been thinking of getting this book for awhile now, your blocks may have just pushed me over the edge! :~)

I really love your design wall! I have a design floor myself, LOL! I have the Women of Influence book, and plan to do it as a block of the month next year. Your progress looks wonderful!