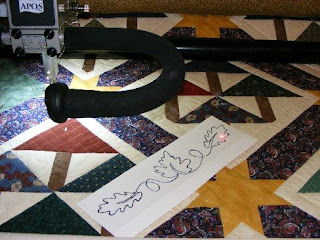 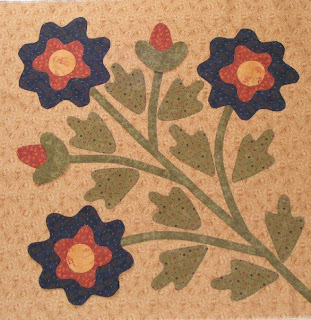 Good for you to begin. Can´t wait to see the result.

way to go Carole! Remember to have fun and breathe while you're quilting! Me? I'm still getting up the nerve to use my short-arm system LOL cheers from Canada QGB

Congrats on starting the quilting and in figuring out a problem you were having. I love your Spring Rose block, although it looks more like Autumn to me.

I'm so glad that you are posting "the learning curve" for us to see and also giving the resolve. Your doing fantastic...keep posting the mishaps along with the successes!

I had to raise the hopper foot on my Gammill too. Made quite a difference. Just keep practicing. You'll get it. I promise.

I'm glad it's getting easier...I'm sure it will be second nature before you know it!!

You'll get there - go easy on yourself. Just relax and enjoy.

Love the new applique project. Is it for me??? teehee!

Practice makes perfect - that's what my piano teacher always told me. You will get the hang of it and soon you'll be whipping out quilts so fast you won't remember how you learned to use the machine.

OH!! Your Spring Rose block is wonderful; love the colors.

The more practice the better you'll get. It's good you have some excellent support when needed.
I love your applique. Who is the designer of the Spring Rose block?

Wow! What a job. I've always been afraid of the learning curve with the longarms. I'd love to have one but that's one thing that scares me off! Looks like you're having a great time though!

It just looks like it is so much fun. I am glad that you figured out the problem of the drag. I know that the experience will make so many things easier as you go about with your projects.

I love the piece that you were working on. The applique is beautiful.

Learning curves are hard! But how fun to have a long arm and actually have the potential to get so much done. I am happy for you!

Your quilting is coming along so well. Next time around you will be a professional.

oh YAY you got one! APQS is fantastic(i have a liberty and mom has a millie) happy quilting!